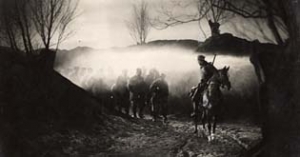 Russia 1917. On each of the 729 days that they have been in a POW camp together, Richard has talked about his wife Anna to his chum Karl. On day 730, they attempt an escape. As they make their way back home, Richard is re-captured. Karl arrives in Hamburg alone a year later. In hopes of finding his former camp-mate, Karl visits Anna, but Richard has disappeared in the fog of war. Anna offers Karl a room in her flat. When, in the end, Richard does manage to get home, Karl and Anna are a couple … Producer Erich Pommer had just returned from Hollywood where he had made two war films, "Hotel Imperial" and "Barbed Wire". With this story of a love triangle, he brought American production methods to bear on Weimar cinema. The film's international flavour was emphasised by the presence of Swedish star Lars Hanson in the lead, and a decidedly reasonable reappraisal of the events of the Great War. In the tradition of earlier intimate dramas, the film focuses entirely on the psychology of the three protagonists. In the process, it creates a model of masculinity – unusual for the way the subject was normally dealt with in Germany at the time – that is utterly devoid of military bearing.