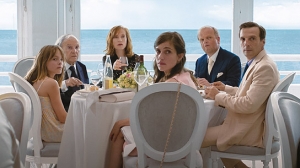 Michael Haneke's ensemble film portrays a family: In Calais, the aging, well-off Georges Laurent is living under one roof with several generations of his family. Among them are his daughter Anne, who leads the family-owned construction company, her fiancé as well as her grown-up son Pierre. Also George's son Thomas, married for a second time, lives in the family mansion with his wife and their child. His teenage daughter Eve from his first marriage also belongs to the family. They are all served by the Moroccan couple Rachid and Jamila, who the family took in because of the unbearable conditions in the refugee camp. Together the Laurents play happy families to hide that underneath it all, things are starting to fall apart: After an employee work accident, Anne considers selling the family business, Eve finds out that her father is leading a double life, Pierre is suffering from depression and George has become weary of life. Now, he is in desperate need of someone willing to assist his dying.