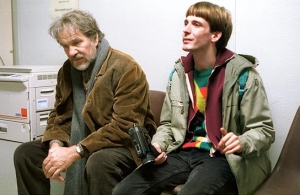 Some films are driven by effects, others by action. Kadir Soezen′s "Gott ist tot" (translation "God is Dead") is character driven.

Heinrich′s pride and joy is his motor-home. It symbolizes his hopes for freedom and a better life in Italy; hopes which receive a major blow when it′s impounded by the authorities. Undeterred, Heinrich is determined to stand up for his rights and fulfill his ambitions, the honest way.

Mike sees things completely differently and his criminal schemes only serve to put the tentative attempts at reconciliation between father and son to a hard test.

"The film shows the protagonists′ poverty," says writer-producer-director Soezen. "I don′t mean their financial poverty, but more their emotional poverty. Underscoring and emphasizing this are moments of wild amusement and scenes of triumphant self-proclamation. The film is intended to provoke social criticism." "Gott ist tot" is a story about home (as in where the heart is) and lack of orientation, social coldness and emotion.

Visually, Soezen has opted for a documentary-style narrative ("The camera works close up to the protagonists but still allows them room to breathe," he says) but not at the expense of what he calls "poetical pictures."