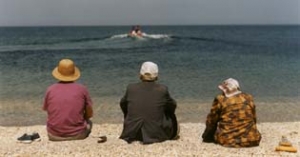 Documentary on the last leprosy station in Europe, which is located in the Romanian Danube delta: Originally a monastery, Tichilesti was turned into a camp for deported leprosy patients in 1929. For decades, the living conditions were defined by malnourishment, primitive sanitary conditions and overcrowded housings, yet, Tichilesti still developed into a small village with its own church, town square and home for the elderly. Officially, the lepers didn't exist, and in its yearly reports to the WHO, the regime of dictator Ceaucescu stated that there is no leprosy in Romania. In fact, up to 200 people lived in the "leprosy valley". The film chronicles the everyday life in Tichilesti, where still over twenty people reside.