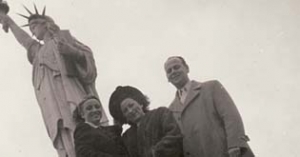 As a child, Knut Elstermann once asked his "aunt" Gerda, a former neighbour and friend of the family who now lived in the US, about her child – but this only caused the startled silence of all present and Elstermann never got an answer to his question. This episode never left him alone until he decided 30 years later to finally get an answer to his question, and at the same time to reveal the story that is hidden behind the silence he once caused. The documentary film accompanies the meetings and conversations of Elstermann, who today works as a journalist, and his old "aunt" Gerda, a German Jew who grew up in Nazi Germany and survived the horror of the holocaust.