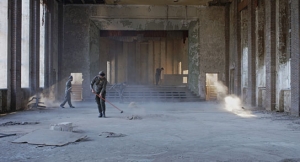 During the GDR era, the "Valley of the Clueless" in Saxony was too far from both Berlin and the former West Germany to receive TV broadcasts from there. Back then, life was simpler, recalls one resident in Florian Kunert’s film – in stark contrast to today, where the region has become the focus of much negative media attention for its widespread xenophobia. Born in 1989, Kunert grew up here. In his film, he conducts an experiment: Among the ruins of the former state-owned farming equipment factory "Fortschritt" (Progress), he stages cinematic recollection both in front of the camera and via editing. He has the young Syrian refugees living here today meet with former factory workers. Songs of the Free German Youth movement, East German Trabant cars and even a horse initiate reenactments whereby the protagonists become performers of their own stories. Archive material from when the friendship between Syria and the GDR was celebrated is contrasted with contemporary footage of gatherings of the far-right Pegida movement. Kunert’s work as a director resembles that of a therapist, one who seeks to understand a complicated present by engaging with a past that resists any simple retelling.