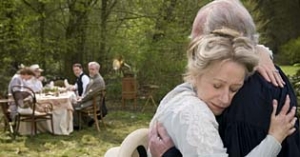 At Yasnaya Polyana, Leo Tolstoy’s estate, 1910 will be the last year of his life. Drama arises when his wife of 50 years, Sofya, finds out that the writer may cede to the wishes of his followers and leave the rights to his work not to her, but to the public domain. With the cautious support of Tolstoy’s private secretary, Valentin Bulgakov, Sofya begins the fight for her rightful inheritance. This brings her not only in an acrimonious battle with the "Tolstoyans", but also into passionate conflict with her husband … Helen Mirren portrays the woman who bore Tolstoy 13 children and prepared his major novels for publication. Yet her interpretation is not of a long-suffering wife, but as an equal shareholder in the success of "War and Peace" and "Anna Karenina". Interacting with Christopher Plummer as Tolstoy, she brings to life a complex character who is vital, feisty, but also tender and funny, playing a woman who in the history of literature, is normally a background figure. For their portrayals of the caresses and skirmishes of a couple in the winter of their lives, both actors were nominated for Oscars in 2010.