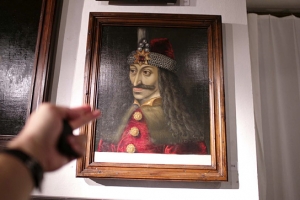 In 1897, when Bram Stoker wrote his novel "Dracula", Romanians had little interest in the history of their medieval leader Vlad Tepes (who was born in 1431). He rightfully got the moniker Tepes (= The Impaler), though he probably wasn't crueler than other tyrants of his time. The Saxons from Transylvania were badmouthing him because he had been messing with their business affairs. When the novel became a bestseller, the Romanians quickly re-discovered Dracula as a commodity. The country is full of Dracula castles, hotels and fairs, and everywhere one can buy Dracula memorabilia. We are going on an entertaining trip through this ragged, wild and beautiful country, which somewhat longs for a leader like Dracula for corruption is just one of its big problems.

We get to know Vlad Tepes, the original Dracula, whose heir dictator Ceausescu badly wanted to be, and we learn about the demise of the Germans in Romania, whose 1000-year-history vanished in just one summer after the fall of the iron curtain.