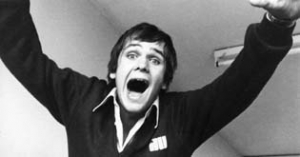 High school reunion, graduation class of ′79: we meet again after 16 years. Three of us are missing: they have committed suicide in the intervening years. Shortly after graduation - 1979: Thilo, a rebel, ready to charge ahead. He wants to be a musician. Thilo breaks free and disappears to France with a buddy.

They end up in jail. A turning point? Rudi, son of a greengrocer. Rudi is popular, a sweet guy. He graduates with an "A" average. He goes to Scotland and works as an assistant at a College. He has never felt better. After one year he returns to Stuttgart. Something is wrong with him. Three weeks later he is dead. Thilman: he played music with Thilo. He leaves high school after 11th grade, begins an apprenticeship as a metalworker. He moves to Berlin to avoid the military draft. Thilo visits him there. He has few friends. One morning, he goes into a garage, closes the gate and turns on the motor. When Tilman dies, Thilo reports himself to the police. But nobody believes him. Two years later, Thilo also goes into a garage. What emerges is the portrait of a whole generation, one that has fallen through the grid of history.