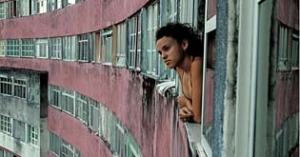 Jéssica is 16-years-old and lives with her mother Maria and her step-father Biu in a village on the São Francisco River in eastern Brazil. Bui works at one of the vineyards that have sprung up on the other side of the river. Thanks to the vineyard’s irrigation system, the whole valley is booming. This prosperity has not had much effect on Jéssica’s family. Biu earns a bit of extra cash with the illegal sale of rare wild animals. As for Jéssica, her life revolves around school; her afternoons are spent with her mother and her girlfriends. But then, one day, Jéssica is raped by Biu. Maria urges her not to report the crime to the police. All at once, Jéssica’s intact world is in ruins.

She feels just like one of the armadillos that Biu slings into the backyard after his hunt. Like so many girls who suffer a similar fate, Jéssica starts working as a prostitute. At first she works the streetwalking district nearby, but then a lorry diver takes her with him to Recife, where Jéssica starts a new round of nightclubs, paid sex with tourists, and sea. After her nights’ work in the ”Amazonas” bar, she goes back every morning to a shabby apartment run by an old prostitute named Dona de Vaga, who lives on the exorbitant rent she extorts from her young colleagues for their miserable rooms.

But Jéssica still has a dream. Like many of her colleagues, she waits for the right man to come along and fall in love with her. It looks as though her dream may even come true when she meets a German man named Mark. She soon begins to fantasise about sharing a life of plenty with him in a cold, wintry country.