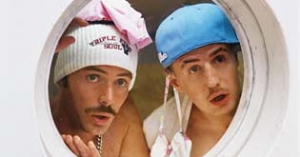 SOS - The Bunnyguards on Board

Erkan & Stefan make it to the final round of the immensely popular game show "THAT TAKES THE CAKE" of star-host Hardy Flanders. The contestants are usually humiliated but the winner always gets an attractive surprise-prize. In contrast to Erkan, Stefan is a devoted fan of Hardy Flanders. Behind the scenes of the show - and unknown to the public - a drama takes place: the high-handed, ever-grinning Flanders has just fired his producer, Karin Schwartau, who has misappropriated prize-money.

To everyone′s surprise, our boys beat the undefeated champion Alex in the final and win. When Flanders gives his winners the choice of €100,000 in cash or the "Super-Surprise-Prize", Stefan makes a spontaneous and "surprising" decision...

Erkan & Stefan board the cruise ship "TS Albatros" and everything seems perfect: Good vibes, babes, captain′s dinner, clay-pigeon shooting and, in the middle of everything, Hardy Flanders, who is supposed to be their host for a party-filled week. Erkan still can′t believe that his friend has chosen the cruise over the cash and the star-host′s macho manners are slowly getting on his nerves. Stefan, however, is in heaven - his biggest idol is in the cabin next door - but just when Stefan wants to propose his brand-new, cool concept for a game-show to Flanders, he finds the star-host dead in his bathroom.