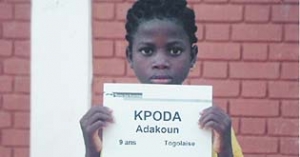 In 1964, the island ferry Nordby was launched in Denmark. Three decades later it was taken out of service and sold: to the Nigerian football player Jonathan Akpoborie who wished to support his family with the money he earned playing in the German national football league.

He christened the ferry in his mother’s name: Etireno. Soon afterwards, the Etireno appeared in the headlines of the international media – as a suspected child slavery ship off the coast of West Africa. When it became known who the owner of this ship was, his club VfL Wolfsburg immediately parted company with its Nigerian striker. The footballer’s guilt was never proven.

The film reconstructs the events and uses them as an opportunity to begin a search for the protagonists at the time: What were the consequences of the fateful journey for the children on board the ship? How did life continue for the Togolese girl Adakou? What does the future hold today for Nouman, the young boy from Benin? What became of the striker’s career? And the ferry – does it still exist?

The accounts and meetings create a German-African story about dreams, life plans and the trading commodity humans.