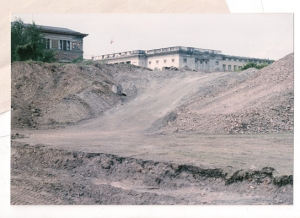 A blend of essay film and long-term documentary focusing on the Berlin compound which housed the headquarters of the Nazi secret police Gestapo and is now the site of the Topography of Terror Documentation Center. Between 1986 and 2010, director Martin Gressmann has frequently filmed the compound and the surrounding areas. His film depicts how the place changed over the years: For decades, it was neglected no man's land, before first archeological excavations in the 1980s revealed the foundations of the underground SS offices and torture chambers. Finally, the place became home for a museum dedicated to documenting the Nazi terror. The film's soundtrack features Gressmann's own thoughts and comments from eyewitnesses, historians, city planners and politicians.