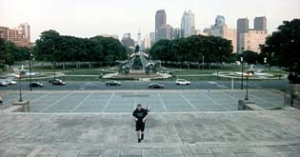 Comeback
A dark, seedy attic in Munich. This is where Juergen, a German boxing pro whose last fight is three years in the past, lives and trains. In order to make a living he works as a bouncer in a bar. Week after week he tries to arrange a fight through US matchmakers on the phone in a local call shop. Juergen "The Rock" Hartenstein, ex-German Champion in the super middleweight division, has a dream: he wants to launch his international comeback on his own account. Eventually, Juergen is called to fight an American newcomer in Philadelphia and, together with his trainer, he sets off to the home of Rocky. This is his big chance.