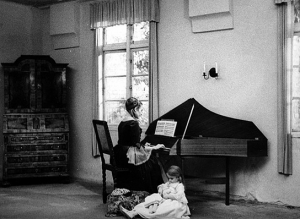 Extracts from 25 pieces of music, from the Brandenburg Concert No. 5, Allegro 1, bars 147-227, to the first part of Choral BWV 668 "Before Thy throne I step", are presented as self-contained musical sets. In between these examples of Bach′s work, his second wife Anna
Magdalena, whom he married in 1721 and with whom he led a happy life
until he died in 1748, describes the various stages in her husband′s
life, from his post as conductor in Coethen until he passed away
"quietly and gently". Anna Magdalena did not really leave a diary for
posterity. The Short Chronicle of Anna Magdalena Bach published by the
English author Esther Meynell in the 1920s is a compilation in exactly
the same way as Jean-Marie Straub′s text. The Englishwoman′s book
proved a best-seller in Germany and served as the source of inspiration
for the film′s title.