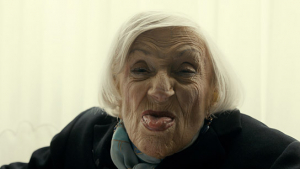 Chichinette - How I Accidentally Became a Spy

Marthe Cohn's story could be straight out of Hollywood: a petite, 'Aryan'- looking, Jewish woman who spied for France in Nazi Germany, delivering vital information about troop movements. Honored several times, she never spoke of her experiences. Now, at the age of 96, having kept her silence for sixty years, she tours the world as a "superstar" among WWII witnesses. A lively and entertaining public speaker, back then she risked life and limb, spending several years on the run until she witnessed the liberation of Paris, setting the final  seal on her fight against the Nazis. Her fiancé and her sister were not so fortunate. Marthe Cohn's message is the essence of her life: "It is always possible to fight injustice, even under the worst circumstances."