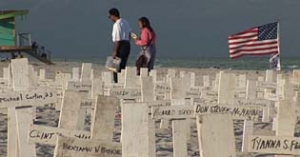 Camilo – the Long Road to Disobedience
Camilo Mejia grew up in Managua, the capital of Nicaragua, as son of the famous songwriter and Sandinista politician Carlos Mejia Godoy. To secure a better future for himself, Camilo and his mother emigrated to the USA when he was 18, where he was encouraged to join the US Army.

In 2003, the last year of his obligatory military service, Camilo′s unit was deployed to Iraq, based in the especially violent Ramadi region in the Sunni triangle.

Camilo′s description of his return to the USA: "Once I returned home, I had the opportunity to put my thoughts in order. Far from the sounds of machine guns and mortars, it becomes hard not to listen to what our heart is telling us. I came face to face with my feeling about the war and with memory of each and every one of my actions. And I tried to justify my behavior, my being in Iraq in the first place. I realized I was holding myself accountable for my own behavior. When the sounds of battle are gone, the sounds of one′s own conscience takes over."

Award-winning director Peter Lilienthal sketches a poetic and authentic portrait of a young man who has bravely spoken out against the politics of a country in which he is not even a citizen (but for which he has served as a soldier).

And the wider implications of US recruitment of Latin American youths is explored.