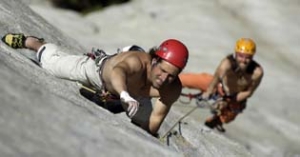 "To the Limit" is the story of two brothers, Alexander and Thomas Huber, who have been testing themselves in the mountains since early childhood. Today they are known to be among the world’s best sport and alpine climbers, impressing the world with their courage and breathtaking exploits. They are brothers who trust their lives to each other in the mountains but who go their separate ways in private life; brothers who experience conflict because of their opposite ways yet who are as inseparable as twins; brothers searching for their limits. They are risk-takers in the extreme.

Now Alexander and Thomas have set out to break the record in speed climbing at the wall of all walls, El Capitan in Yosemite Valley, California.