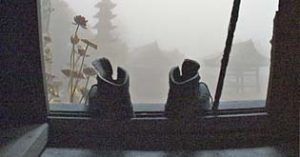 It′s older and longer than the Spanish pilgrimage to Santiago de Compostela. It′s probably the longest of all marked pilgrim-routes of the world: the hachiju-hakkasho!

It circles the island of Shikoku. According to the temples, shrines and monks, Shikoku is called the "holy island". Pilgrims have been going here for 1,200 years, along a route of 1,300 km, marked by 88 temples.

Normally only Japanese Buddhists walk the route. Some of them have done it over 300 times. Only by exception does a foreigner participate here. Like in the spring of 2007: A German pilgrim was on the road, on his own, joined by his camera. He was searching for "henro boke", the special state of mind of a pilgrim. That′s the aim of this amusing and self-ironic documentary.
Source: German Films Service & Marketing GmbH