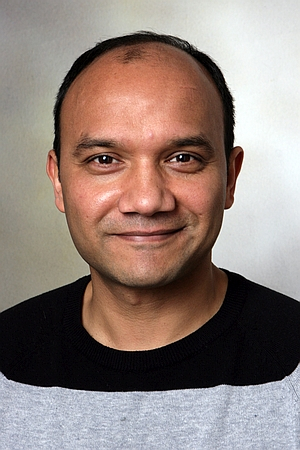 Shaheen Dill-Riaz, born on 12 February 1969 in Dhaka, Bangladesh, initially worked in his native city as a film critic and was also one of the organizers of the International Short Film Festival there. In 1991 he began studying philosophy in Dhaka. After learning German at the Goethe Institute Dhaka from 1989 to 1991, he received a scholarship from the Berlin Goethe Institute in 1992 for a two-month language course in Germany. Dill-Riaz remained in Berlin and studied art history, Indian art history and theatre studies for two years. He also worked as an author and critic for the German film magazine Shomingeki and the French photo magazine 6mois, among others.

In 1995 he began his diploma studies in the field of camera at the Film and Television Academy 'Konrad Wolf' in Potsdam-Babelsberg. Dill-Riaz's graduation film "Sand und Wasser" ("Sand and Water", 2002) was a big success: the documentary about the difficult living conditions in the Jamuna Delta was shown at several international festivals and was awarded the annual prize of the DAAD as well as the Babelsberg Media Prize.

Dill-Riaz's next films also dealt with the living conditions in his native country: "Die glücklichsten Menschen der Welt" (2005) documented the everyday life of four young people in the metropolis of Dhaka; "Eisenfresser" (2007) tells of the inhuman conditions under which bitterly poor seasonal workers in southern Bangladesh have to work at the gigantic shipwrecking yards. This film has been awarded at several international festivals and received the prestigious Grimme Prize in 2010.

In "Korankinder" (2009), Dill-Riaz, who also acts as cameraman in all of his films, provided an insight into the hermetic world of the Koran schools in Dhaka. At the Duisburg Film Week 2009 the film won the audience award. For television he made the documentary "Schulter an Schulter" (2012), in which he describes the cooperation of German and Afghan soldiers in Afghanistan. For the TV reportage series "Fremde Kinder" he shot two episodes: "Der Netzwerker" (2011), about a 14-year-old from Dhaka who has developed an original business model as a telephone operator; and "Der Vorführer" (2012), about a ten-year-old Bangladeshi who has developed an irrepressible love of cinema beyond his precarious living situation and works as a film projectionist."Der Vorführer" (2012) received a Grimme Special Award for "Culture". In "Fernglück" (2015, TV), Dill-Riaz changed perspectives in a way and accompanies a group of young German development workers in Bangladesh.

In addition to his work as a filmmaker, Dill-Riaz has also been working as a lecturer, for example at the Ruhr University in Bochum (2011/12 and 2013/14). He has been giving film workshops, among others, on behalf of the Goethe Institutes in Kabul (2013) and Khartoum (2016).

Dill-Riaz presented his next documentary film at the DocPoint Film Festival in Helsinki in January 2019: For "Bamboo Stories" (2018) he accompanied bamboo cutters in Bangladesh on their perilous river journey from the bamboo fields to the wholesalers in Dhaka. The German theatrical release was in November 2019.