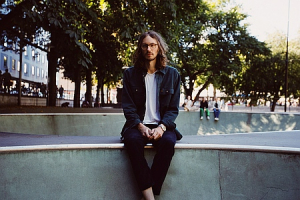 Nathan Grossman studied at the Stockholm Academy of Dramatic Arts and subsequently worked as a photographer for the Indian edition of "Rolling Stone". He then focused on documentary film making, specializing in environmental issues. Grossman's short film "The Toaster Challenge" (2015), in which an athlete tries to toast a slice of bread with self-generated energy, received worldwide acclaim - the video was viewed more than 15 million times.

In 2017, Grossman realized the three-part mini-series "Köttets Lustar" about the increasing consumption of meat in Sweden. The series was broadcast by the public broadcaster SVT and provoked a debate about meat production and consumption. At the Swedish television award Kristallen, "Köttets Lustar" was nominated as the best information program of the year.

Nathan Grossman's feature film debut also attracted a lot of attention: Starting with footage of the first school strikes by 15-year-old Greta Thunberg, Grossman succeeded in documenting the development of the worldwide climate rescue movement "Fridays For Future" at close range. For his film, he accompanied Greta Thunberg for over a year. "I Am Greta" celebrated its premiere at the Venice International Film Festival 2020; shortly afterwards it won the Science Film Award at the Zurich Film Festival. The German theatrical release followed on October 16.