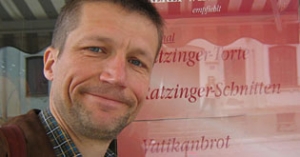 Mickel Rentsch, born 1967 in Fürstenfeldbrück, Upper Bavaria, worked in several positions for a number of documentary, feature, and commercial films after finishing high school in 1986. From 1990 to 1991, he attended "Reduta" drama school in Berlin and subsequently wrote exposés, treatments, and screen plays, before he started to study at Munich’s Hochschule für Fernsehen und Film (HFF).

In 1996, Rentsch went on a travelling cinema tour with his 80-minute long low budget feature film "Vogel fliegen", travelling with a tandem bicycle and his own film projection device. In 2002, he graduated from HFF with the short film "Talks" that won several awards at different festivals. In the same year, Rentsch won the screen play award at Potsdam’s "Sehsüchte" film festival for his feature film screen play "Einmal ostwärts und zurück" that has not been made into a film yet.

In his first feature-length documentary film for the movie screen, "Wir sind Papst! – Marktl am Inn", Rentsch portrayed the birthplace of Pope Benedict XVI and the phenomena surrounding faith and commerce that take place in the once sleepy Bavarian village.

Besides his movie projects, Mickel Rentsch also organizes film seminars for teenagers, does art and political satire projects, and is involved with climate protection and ecological urban planning.