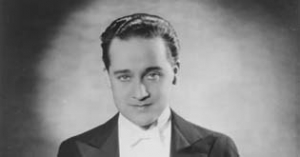 The illegitimate son of the Danish actress Eva Haller and the Swedish Captain von Waldheim, Max Haller was born in Mannheim on the 22nd of December, 1897. Making his first appearances at the Munich Cabaret Simplizissimus in 1914, he went on to Vienna, where he completed his studies as a ballad singer. Thinking that it may perhaps be advantageous to draw attention to his Scandinavian origins, he changes his name to Hansen. Profiting from his powerful, highly modulating voice, he becomes known as the "little Caruso" in cabarets and variety theaters, performing comical couplets, sketches and opera parodies. In 1923, Hubert Marischka engages him for the role of Csupan in the play "Gräfin Mariza" at the Theater an der Wien, which after 900 performances goes on to be staged at the Metropol-Theater in Berlin, where Hansen becomes quickly successful.

From 1925, Hansen records his own hits, which audiences appreciate for their parody and cabaret-like wit. Together with Paul Morgan and Kurt Robitschek, he establishes the Cabaret of Comedians. His greatest stage success is his performance of Leopold in Ralph Benatzky's musical "Im weißen Rößl" (The White Horse Inn) in 1930, a role he had already played in 1926 in Richard Oswald's film version of the comedy by Blumenthal and Kadelburg.


With the premiere of "Das häßliche Mädchen" on the 8th of September,1933, which had been postponed for a long time simply because the authors Hermann Kosterlitz and Felix Joachimson happen to be Jewish, there occurs a pre-arranged Nazi incident. Hansen is called names and thrown with tomatoes. Not because of his supposed and scarcely proven Jewish origen, which may at first seemed to have been the reason, but rather because of Hansen's 1932 hit song "Warst Du schon mal in mich verliebt?", mocking Adolf Hitler for being homosexual. Hansen immediately leaves for Vienna, where he has a highly successful stage career. He leaves for Copenhagen before the "Anschluss" in 1938, which annexes Austria to Nazi Germany.

In 1951, Hansen returns at first to Germany, performing a number of roles at various Berlin theaters, including again the role of Leopold in "Im weißen Rößl" (The White Horse Inn). In 1953, he returns to Denmark, where he performs further stage roles. He lives with his second wife Britta and their three children in Copenhagen, where he dies on the 14th of November, 1961.