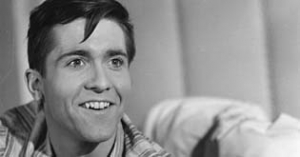 Klaus-Peter Thate was born December 14, 1940, in Meiningen, as the son of actor, director, and artistic director Heino Thiele. He graduated from drama school in Berlin-Schöneweide and became a cast member of Landestheater Parchim. Shortly after, director Joachim Kunert, who had met Thiele in drama school, brought him to DEFA in Babelsberg and put him in the title role of his anti-war film "Die Abenteuer des Werner Holt" ("The Adventures of Werner Holt", 1964). The film immediately introduced Thiele to a large audience.

During the following years, the actor participated in numerous film and TV productions, but never committed to one single genre. Thiele starred in the Gojko Mitić western "Weiße Wölfe" (1968), in the children"s film "Susanne und der Zauberring" (1973), in the thriller "Die Kolonie“ (1981), and in the fairy tale movie "Der Bärenhäuter" (1985). Unfortunately, Thiele was not able to repeat the success of his debut film. Thus, he frequently had to settle for minor roles.


Thiele was repeatedly cast for roles of Nazi characters, for instance as senior storm leader Menge, and as head storm leader Thiel (sic!), respectively, in two GDR TV series, directed by Rudi Kurz, "Archiv des Todes" (1980) and "Front ohne Gnade" (1984), that both deal with the topic of the fight against fascism during the Nazi regime and both blend contemporary history with a fictional plot in 13 one-hour episodes each.

After the German reunificaton, Thate mainly worked at theatres, at first in Hamburg and Munich, later as cast member of the Störtebeker festival in Ralswiek. Furthermore, Thate often appeared on TV and was on camera for several TV series, including "Polizeiruf 110", "Unser Lehrer Dr. Specht", and "Tatort".

Klaus-Peter Thiele lived together with his long-time partner, the painter Rosemarie Rautenberg. Their daughter Valeska Rautenberg, born 1979, also works as an actress and singer.