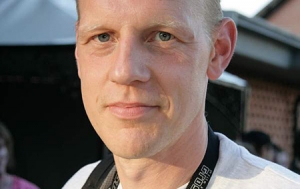 Jörg Buttgereit, born December 20, 1963 in Berlin, made several short films between 1977 and 1985, among them “Manne – the Muwi” (1981) with Bela B. Felsenheimer, "Blutige Exzesse im Führerbunker" (1982) and the compilation "J.B.s Horror Heaven" (1984). His first feature film, the single-handedly released low-budget-production "Nekromantik" was inspired by the American serial killer Edward Gein and tells the story of a necrophile couple.

His second feature film "Der Todesking" (1990) consists of seven episodes that center on the subject of suicide, while "Nekromantik II" (1991) again focuses on necrophilia, and "Schramm" (1993) explores the spiritual abyss of a serial killer. With these films, Buttgereit acquired a reputation as a subversive and daring filmmaker who constantly explores the borders of commonly accepted imagery. His works got internationally known and attracted the interest of critics and film studies. Yet his works were also subject to efforts of censorship: "Nekromantik II" was temporarily  banned by the German authorities for allegedly glorifying violence. It wasn't declassified until an expertise by renowned film scientist Knut Hickethier, attesting the film an artistic quality.

The following years, Buttgereit wrote articles and film reviews for the Berlin magazine "Tip" and the film magazines "epd Film" and "Splatting Image". He also published several books on film, among them "Nightmares in plastic" (2001), "Japan – die Monsterinsel" (2006) and "Nekromantik" (2007), and created radio plays as "Ed Gein Superstar" (2002) or "Sexmonster" (2009). In 2005 he directed the Punk-musical "Gabba Gabba Hey" including music of the Ramones, in 2007 the stage drama "Captain Berlin versus Hitler". His award-winning TV-documentary "Die Monsterinsel" already aired in 2002, was followed in 2009 by "Monsterland". In addition to this, he continued to direct music videos and shorts.

Not least, Buttgereit is also active as a playwright. His play "Kannibale und Liebe. Eine True Crime-Tragödie", a stage adaptation of his radio play "Ed Gein Superstar", premiered at the Theater Dortmund in October 2012. The following year, he directed a stage adaptation of the Broadway play "The Elephant Man". His own plays "Nosferatu lebt!" and "Besessen" (both 2015) premiered at the Theater Dortmund, too.

In addition to this brief return to film, Buttgereit continued his work as an author of film reviews, comics, radio plays, radio features and theatre plays. In 2017, he directed his play "Die lebenden Toten oder: Monsters of Reality" at the Schauspiel Essen; the following year he led the discussion series "Jörg Buttgereit's Nackt und Zerfleischt" at the Theater Dortmund.