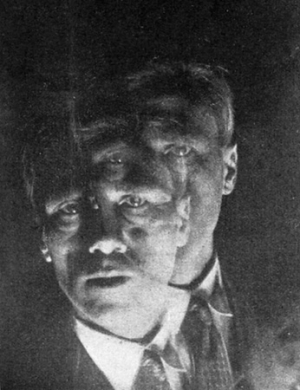 The son of a wealthy farmer and carpenter's workshop owner started an apprenticeship as a carpenter in his father's business after finishing school in 1906. After his final examination in 1908 he went to Hochschule für Bildende Kunst in Berlin, and in 1909 to Weimar where he devoted himself to expressionist painting. In 1914, Richter was drafted for military service, severely wounded and released from military service as a disabled person. In 1916, he exhibited his works in Munich and became a member of the Dada group in Zürich.

In 1918, Richter met the Swedish painter Viking Eggeling and moved with him and Eggeling's wife Marion to the country estate of his parents in Klein-Kölzig (Lausitz) in the fall of 1919. In Klein-Kölzig, they wrote their proclamation "Universelle Sprache", made their first role images, and, from 1920 on, started time-consuming and expensive experiments with film. Theo van Doesburg showed a film experiment from December 1921 (with a length of 90 seconds) that later became a part of "Film ist Rhythmus" ("Rhythm 21", 1921 to 1925) during a lecture tour in Paris. In 1922, they finished "Fuge in Rot und Grün", that today is considered to be lost.

After his separation from Eggeling, Richter finished "Rhythmus 23" ("Rhythm 23", 1922 to 1924) based on the colored horizontal role images "Fuge 23" and "Rhythmus 23". The film was recut several times after its premiere in Paris in 1923. From 1923 to 1926, Richter published the art magazine G. From his last abstract film "Rhythmus 25" ("Rhythm 25") that Richter colored by hand, only one copy was made due to the great cost. The copy was later lost.

After that, Richter made narrative short films that were influenced by Dadaism and Surrealism: In "Filmstudie" ("Film Study", 1925/26), he used real images for the first time. On the occasion of the 1928 Kammermusikfestival Baden-Baden, Richter finished the film "Vormittagsspuk" ("Ghost Before Breakfast") together with the photographer Werner Graeff. Furthermore, Richter made the half-documentary short film "Inflation" (1927/28), the commercial films "Bauen und Wohnen" (1928) and "Muratti" (1926–29), and finished the films "Rennsymphonie" ("Race Symphony"), "Der Zweigroschen-Zauber" ("Two Penny Magic"), and "Alles dreht sich, alles bewegt sich" in 1928.

In 1929, Richter became the head of the film department of Stuttgart's Werkbund exhibition "Film und Foto" and published the book "Filmgegner von gestern – Filmfreunde von heute". He participated in the Congress of Independent Film in La Sarraz, Switzerland. In London, Richter finished the film "Everyday" (1929). In 1931, he traveled to Moscow, and in 1932, to Leningrad. Then, in 1933, he fled Russia and went to the Netherlands where he produced commercial films. He then went to Paris, and, in 1937, to Zürich where he worked as a production manager. In 1939, Richter finished his second book "Der Kampf um den Film" that was published nearly 40 years later. He moved to Basel and went to New York in 1941 when he was invited by the Guggenheim museum. In 1942, he started to teach at City College. Soon, he became the head of the college and stayed until 1956.

Together with his friends, European artists including Max Ernst, Man Ray, Fernand Léger, and Marcel Duchamp, he created the feature-length surrealist film "Dreams That Money Can Buy" (1944 to 1947) that won an award at the Venice film festival as best contribution to the progress of cinematography. From 1958 on, Richter lived in Ticino during the winter. He filmed "Dadascope" from 1956 to 1961 and painted large role images again in the last years of his life, for instance, about the Watergate scandal (1974).