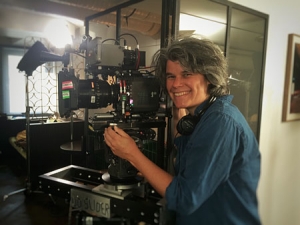 Felicitas Darschin, born on 18 January 1982 in Munich, gained her first experience in the media sector in 1999/2000 through internships at Tele Norm Filmproduktion GmbH (Unterföhring) and the public broadcaster Bayerischer Rundfunk. From 2001 she worked as assistant director and production assistant as well as production and production manager for short films and commercials. In 2003 she started to study directing at the Hochschule für Fernsehen und Film (HFF) in Munich, from 2006 on with a focus on commercials. During her studies she realised several short films and commercials. Her short film "Zwischenzeit" (2005) received the audience award at the goEast film festival in Wiesbaden.

After graduating from the HFF in 2007 (with the short feature film "Teddytester"), Darschin shot the fairytale film "Zwerg Nase" (2008) for Bayerischer Rundfunk. At the Five Lakes Film Festival, the film was awarded the Audience Prize for Best Children's and Youth Film. In the following years Darschin directed the marriage comedy "Im besten Alter" (2011, TV) and shot several TV documentaries and reportages, for example "Lebensader Loisach - Ein Fluss mit vielen Gesichtern" (AT/DE 2012) and "Wieviel Naturschutz verträgt der Mensch? (AT/DE 2015). Felicitas Darschin made her feature film debut with the social comedy "Frau Mutter Tier" ("Mother Bee" 2019), about three very different women who try to do justice to a modern image of motherhood.

In addition to her practical film work, Darschin has been a lecturer at the DMA - Die Medienakademie since 2012.