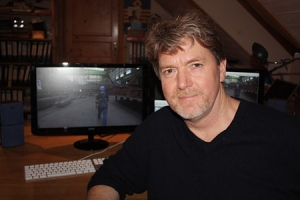 Dieter Schumann was born in Ludwigslust on June 22 1953. From 1970 until 1975, he worked as a seaman, followed by a three-year stint as an assistant director. In 1978, he enrolled in the director's class at the Film- und Fernsehakademie in Potsdam-Babelsberg. Following his graduation in 1983, he started our as a director at the DEFA studio for documentary film. Following several documentary shorts, he made his feature-length debut with "flüstern & SCHREIEN" (DDR 1988), a documentary on underground music in East Germany shortly before the fall of the wall. In 1991, Schumann became one of the founders of the FilmKunstFest Schwerin (today known as Filmkunstfest Mecklenburg-Vorpommern). In 1994, he completed "flüstern & SCHREIEN 1988/1994", a follow-up to his 1988 doc, in which he focused on bands like Sandow, Feeling B and the early Rammstein. The film aired on TV in 1995, but due to legal reasons, it hasn't been screened since then.

Schumann went on to produce and direct documentary shorts, and in 2002, he founded his production company Basthorster Filmmanufaktur. Between 2003 and 2009, he made several episodes of the TV documentary series "Mecklenburger Profile", which portrays Mecklenburg residents from different walks of life. Schumann then caught attention with his long-term documentary "Wadans Welt" (2010), which chronicles the bankruptcy of the Wadan shipyards in Wismar. The film won the Deutsche Kamerapreis for Documentary Feature, the BLM Filmpreis at the DOK.fest in Munich and the audience award at the Filmkunstfest Mecklenburg-Vorpommern.

At the 2016 Filmkunstfest Mecklenburg-Vorpommern, Schumann presented his two new documentaries "Notaufnahme - wenn Fremde näher kommen" (2015) and "Weltbahnhof mit Kiosk - Wie sich Stammgäste und Flüchtlinge in Boizenburg begegnen" (2015). The latter became the basis for his next feature-length film "Neben den Gleisen", which portrays the everyday life at a convenience store in the small town of Boizenburg. After premiering at the 2016 DOK Leipzig Festival, the film was released in April 2017.