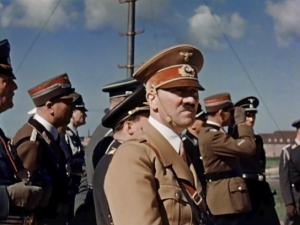 Documentary that attempts to analyze Hiter's personality and the reasons for his popularity among a majority of the German public. With extensive use of archival footage, including previously unreleased materials, filmmaker Hermann Pölking creates a portrait of Hitler and sets him into relation to the socio-political realities of the early 20th century. The film details the later dictator's biography and tries to explain the phenomenon Adolf Hitler from a historical distance.