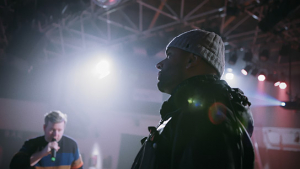 20 years after the release of their classic 'Unter Tage' (Underground), RAG take stock. With only two LPs, the rappers Aphroe, Pahel and Galla as well as DJ and producer Mr. Wiz made their mark on the big German rap boom in the late 90s. Two decades later the film accompanies the former band members from the deepest Ruhr Valley area to Washington D.C., documents their first concerts after 15 years of stage abstinence and illuminates the tragic death of RAG member Galla. Companions like Jan Delay, Kool Savas, Marteria, Curse, Die Kassierer and many more have their say. The film title is a reference to the Gil Scott-Heron classic 'We Almost Lost Detroit'.