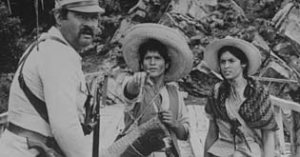 Trini is an Indian farmer′s boy who lives in a village in Mexico during the 1910s. It is a time of unrest when downtrodden farm workers lead by Emiliano Zapata revolt against the land owners. Trini′s uncle Jeronimo is among the labourers who fight for a better future – but as a punishment, he is tortured and humiliated right in front of Trini′s eyes. But this is only the beginning of a spiral of violence: During a protest march to a landowner, Jeronimo′s girlfriend is killed by a guard. After that, furious farmers completely destroy the house of the landowner who had fled in the meantime. For fear of the approaching military, the Indios hide in the mountains and ask Zapata for help. Zapata calls together his people and in fact succeeds to force the landowner to give his land to the farmers who had been cultivating it in forced labour. Trini and his family join Zapata’s group and follow him around. Trini becomes a scout for Zapata and gets the order to forward a letter to Lenin. On his way, he learns about a murder conspiracy against Zapata. Desperately, he tries to warn the revolutionary leader, but he comes too late: Zapata has already been killed by his enemies.