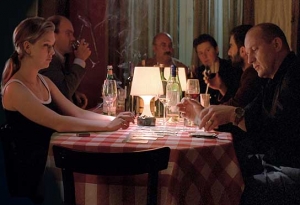 Still with Anna Hermann, Uwe Preuss (both in front)

Nineteen-year-old Lea is honest, direct and not afraid of speaking her mind. She calls her father, Bosse. All she knows about him is hearsay provided by her mother, before her recent death. Bosse, a likeable small-time criminal and the owner of a trattoria, is shocked to learn of his ‘sudden’ fatherhood and tries to get rid of Lea. But Lea is too much her father’s daughter to take such a brush off lying down. On the pretext of looking for a job Lea manages to inveigle her way into the trattoria. Ali, the head chef and Bosse’s right hand man, takes the girl under his wing and somehow – oscillating between recognition, instinct and not-wanting-to-know – Bosse and Lea gradually manage to develop a relationship. Meanwhile Nazmi and Dana, two Kurdish henchmen sent to collect protection money begin turning up at the trattoria with alarming regularity and threaten Bosse’s business interests. Before long, things begin to get out of hand. With trenchant wit, "Trattoria" succeeds in turning the tables on the conventional mores of the mafia movie.