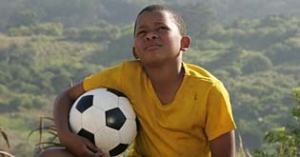 11-year-old Themba, a passionate footballer, lives in an impoverished small South African village together with his mother Mandisa and his younger sister Nomtha. One day, his mother moves to distant Cape Town in order to earn money for the family. Alone with his sister, football remains Themba′s only joy in an otherwise bleak life. During a youth tournament, John Jacobs, head of the "All Star Academy", recognizes Themba′s talent and gives him his business card.. Back at home, Themba and his sister are mistreated by his mother′s boyfriend. When Themba learns that his mother is suffering from HIV, he contacts John Jacobs.