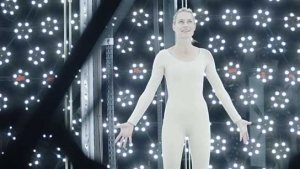 When the acting career of Robin Wright slowly comes to an end, she sees herself forced to undergo a high-tech scanning procedure at the Hollywood studio Miramount and sell the rights to her digital image.

The retired actress embarks on a 20 year private travelling absence on the basis of the contract.

She returns to a radically changed world in which the border between virtual, animated world and reality seems to be overcome. Robin has no other choice than to get out of her body again, in order to find herself. But it’s easier said than done in a world where anyone can become whoever and whatever they want and in which the »truth« no longer exists.