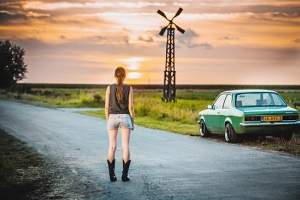 ‘There’s nothing here’ is how fifteen-year-old Meis describes the place where she lives. Indeed her little family home stands pretty much alone in the flat countryside; it’s located exactly at the point where the road makes a sharp turn. A car could so easily run off the road and run slap bang into their living room. Her grandmother sits silently in her wheelchair permanently shaking her head; her father’s favourite position is to be supine on the couch, and her mother is desperate for the family finally to move to the town – it’s as if they’re all paralysed.