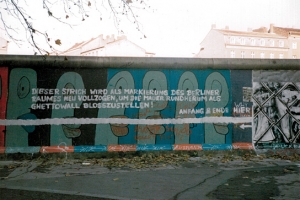 Documentary about an art performance which took place in the year 1986: Five members of the Weimar punk scene, who just recently had left East-Germany, travelled to West-Berlin for a happening: They wanted to paint a white line along the Berlin Wall, symbolizing the crossed out plans of the GDR. Yet evidently, the East-German boarder guards were pre-informed: On the second day, one of the friends was abducted and brought to the East through a secret door in the wall. There he was trialed in court while the others aborted their performance. Later it was revealed that someone in the group was working for the East-German secret police. In addition to lots of historical footage, the film features interviews with all those involved, who still try to make sense of the events and to cope with the betrayal.