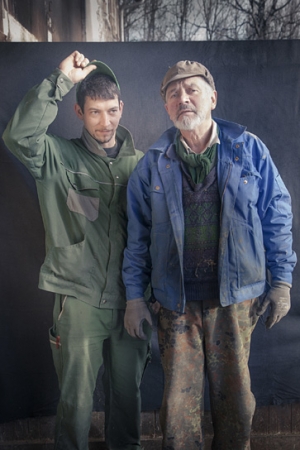 Philipp Kienle, Konrad Kienle (from left to right) in "Sauacker" (2012)

Son of the Soil

If all goes well, Philipp will be the tenth farmer in his family to run the ancestral farm that has been providing a living for the family since 1725. Philipp lives with his girlfriend in a small house on the farm. He is ready to take his and the farm’s future into his own hands. But his father, Konrad, is reluctant to give him more responsibility. He himself had to fight his own father for control over the farm more than thirty years ago.

Since then, times have gotten tougher. In fact, the smallholding has been operating at a loss for years, something Konrad tries to ignore. That is why Philipp wants to try something new. He wants to buy new machines, rationalize work processes and perhaps even switch to organic farming. But where will he get the money for his plans when every day is about just the fight
for survival?

"The farm definitely has potential for optimizing and moving upwards", Philipp tells the banker. But the bank insists on a sustainable plan. His girlfriend is more interested in art than
tractors, and his parents are worried about losing their already meager possessions to radical changes. Armed with enthusiasm, Philipp tries to win over his father for his alternative ideas, but Konrad is just as stubborn as his industrious son.