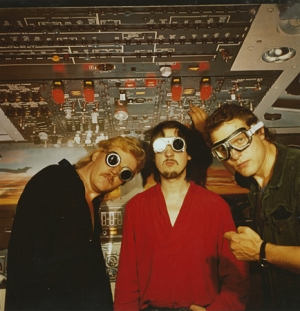 "Tangerine Dream is science fiction!" declares band leader Edgar Froese who died in January, 2015 aged 70. For almost fifty years he and his band "Tangerine Dream" explored sound and its effect on our emotions. This film about one of Germany’s first electronic bands kicks off with the young Berlin musicians who were as inspired by the space age of the 1960s, with its rocket launchings and visions of the future, as they were by their own heartbeat, on which Froese also based compositions.

Aided by the Moog and other synthesisers Froese (and various band members) revolutionised popular music. His explorations took him into the worlds of classical, new and film music. He preferred to visualise moods rather than create clearly structured songs. Directors such as Michael Mann and Paul Brickman discuss their intensive collaborations with Froese that produced some of the most unusual soundtracks of the 1980s, for films such as "Risky Business" (Paul Brickman, 1983) or "Near Dark" (Kathryn Bigelow, 1987). A blend of amateur footage, interviews with band members, relatives, friends and colleagues such as Jean-Michel Jarre that creates a comprehensive portrait of an artistic pioneer.