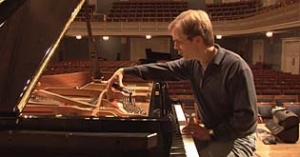 "The tone isn’t breathing", "The instrument need more magic" – typical sentences that Stefan Knüpfer often hears as Steinway & Sons’ chief technician and Master Tuner in Austria. He works with the best pianists in the world. And when Alfred Brendel, Lang Lang or Pierre-Laurant Aimard sit down at the piano, everything has to be perfect, on down to the most exacting tone nuance.

For every piano has its own personality, each piece demands its own timbre, and every interpretation has a particular temperament. The collaborative work between Pierre-Laurent Aimard and Stefan Knüpfer is at the centre of the film. Bach’s "The Art of Fugue" is to be recorded. Aimard has decided in favour of Concert Grand No. 109. The film begins one year be fore the Bach recording is to take place and the two men set out on their long odyssey of sounds. Stefan Knüpfer is a communications wizard; but he is also a technician who assembles, tightens, and fine-tunes. He works with all his senses and produces pianos that give artists wings. "PianoMania" studies Knüpfer’s passionate grappling with the sound of the piano, from deep inside the instrument to the exterior surroundings, in the full concert hall.

The prize-winning documentary by Lilian Franck and Robert Cibis tells – with affection and humour – of moments of the absolute love of attention to detail and perfection. "PianoMania" observes, from unique angles, the enthralling search for the perfect tone.