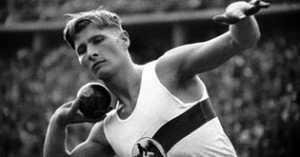 This documentary on the 1936 Berlin Olympics, by famous director Leni Riefenstahl, is the first film ever made on the biggest single sporting event, the Olympic summer games. Apart from Russia and Spain, almost everyone went to Berlin: a total of 4,594 athletes, representing 52 nations. But while the Olympics were one big sporting event, they were also a perfect showcase for Adolf Hitler, tailor-made to give the world proof of Germany′s new image.

Whatever the inevitable setting or background of this film may be, it is foremost a documentary on the fascination of sports. More than 1,200,000 spectators, of whom 150,000 were foreign visitors, watched the different events. The international success of the Olympia films - Fest der Voelker and Fest der Schoenheit - was huge.
Part I:110 min, 3017m; Part II: 95 min,2606 m Source: