Nuremberg and Its Lesson 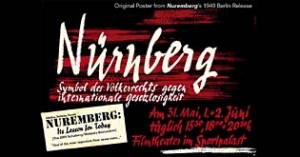 Nuremberg: Its lesson for today

Stuart Schulberg′s film shows: "The Trial of Major War Criminals before the International Military Tribunal in Nuremberg which took place between 14 November, 1945 and 1 October, 1946. The film uses excerpts of the tribunal to document the trial′s progress – from the opening charges to the announcement of the verdict. The film′s structure basically follows the reasons for judgement: the rise of the Nazi state, the unleashing of the World War and the Nazis′ crimes against humanity are all unfurled chronologically and interspersed with historical footage." (www.cine-holocaust.de)

The film was commissioned by the Office of Military Government for Germany, United States (OMGUS). One of this organisation′s employees was ex-Ufa producer Erich Pommer, who held the position of Director of the Motion Picture Branch, Information Control Division. Pommer had emigrated from Nazi Germany in 1933; he took over the film′s production after producer Pare Lorentz had bowed out in mid-1947. Besides comprehensive archive footage and material filmed in the courtroom, the film also made use of excerpts from the documentaries "The Nazi Plan" and "Concentration camps" by Ray Kellogg and Budd Schulberg, both of which were screened during the trial. The images of concentration camps in these films provided emphatic evidence.

The film′s German premiere was held in Stuttgart in November 1948. However, in consideration of the Marshall Plan, the film was never shown in cinemas in the USA. The English-language version was never finished; the original negative and sound recordings were either lost or destroyed. This screening of "Nuremberg: Its lesson for today (The 2009 Schulberg/Waletzky Restoration)" marks the premiere of the original version of this historical document.