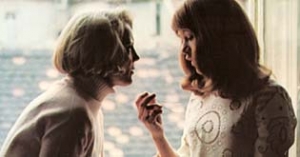 The Cat Has Nine Lives

In the summer of 1967, journalist Katharina is visited in Munich by her French friend, Anne. They take day trips and visit cafés, acquaintances and parties. In a series of conversations, they talk about the chances for female emancipation in a male-dominated society ... This essay film puts five different types of women at the centre of the episodic narrative – an unmarried professional woman, a divorcee confused about her future, a career woman, a deceived wife and a “dream woman”. Director Ula Stöckl said in 1968, “women have never had so many chances to organise their lives the way they want. But first they have to learn that they can want something”. Film critic Christa Maerker called The Cat Has Nine Lives West Germany’s “first feminist film”.

The film, originally shot in Techniscope and printed using the Technicolor dye-transfer process, has now been re-processed by the Deutsche Kinemathek, using the original negative. A Technicolor print stored in the Munich Film Museum was used as a colour reference for the digital restoration.