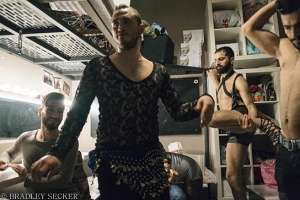 Documentary film about two Syrians, who dream about becoming the first Arabs to participate in the 'Mr. Gay World' competition, a beauty pageant for gay men held annually in Malta. One of them is 24-year-old Husein, who is living in Istanbul and whose conservative family doesn't know he's gay. For him the participation is all about being able to openly express his sexuality in a society that accepts him for who he is. 40-year-old Mahmoud has bigger goals: As an LGBTQI activist living in Berlin, he sees the pageant as a platform to promote his campaign to raise international awareness for gay Muslims. The film portrays both men and the obstacles they have to overcome to be able to finally enter the 'Mr. Gay World' competition.