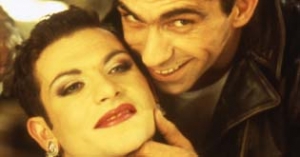 Murat lives in Berlin. He is seventeen, Turkish and gay. He is attracted to the shimmering subculture of young male prostitutes and transvestite bars. But, in doing so, he comes up against the resistance of his brother and his family′s terrible secret.

He has to decide whether he will spend the rest of his life with a lie or the painful truth. "Lola + Bilidikid" tells the story of a youth who frees himself from his family ties and goes his own way. It is a hard, fast and moving film from the Berlin of today.