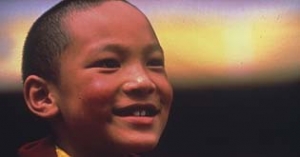 Clemens Kuby worked for seven years on this new work in the remotest parts of Tibet still closed to outsiders, as well as in India, Nepal and Sikkim. The 16th Karmapa was regarded, along with the 14th Dalai Lama, as the high-est-ranking Lama in Tibet.

He died in Chicago in 1981 and was reborn exactly at the place and time (1985) he had predicted in his writings. Karmapa is considered to be the master of three ages - past, present, and future - and is wor- shipped by millions of people as the living Buddha. The film documents the transition from the 16th to the 17th Karmapa. This is the first time that one can see two lives of one person in a film. It is an exciting detective story looking for the continuity of the spirit.