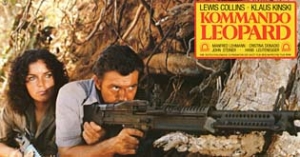 Commando Leopard
Guerrilla leader Carrasco, called "The Leopard", is fighting with his men against the brutal oppressors of his South American homeland. The rebels′ most dangerous enemy is militia commandant Silveira who has planted a spy inside the guerrillas. With a perfidious plan, Silveira sets the rebels on the wrong track and an attack on the dictator results in the death of countless innocent citizens. Thus, Silveira′s plan seems to work, as the rebels lose the people′s support after the botched attack. But "The Leopard" will not give up that easily.