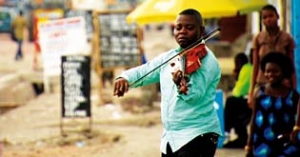 Albert Matubenza is a musician. He has explained the score and their instrument to many a string player – although he himself is a guitarist and plays neither the violin nor the cello. He is currently making a new double bass for his ensemble. Many of the other artisans among the members of the orchestra have since compiled an amazing array of homemade tools to repair their instruments. The musicians also make the clothes they wear for their performances, procure the scores and make sure there’s someone to feed and take care of the children during their long evening rehearsals. Most of the orchestra’s members are either amateurs or self-taught musicians. Even those who have been fortunate enough to have had professional training and find regular work still find themselves struggling to survive in the city of Kinshasa with its population of eight million. For many the day begins at six o’clock in the morning – often much earlier. Nonetheless, rehearsals go on until late at night, almost every day.

Armand Diangienda – a pilot by trade and the orchestra’s founder – is their conductor. His grandfather was the one who inspired him to found the orchestra. And nowa days as many as two hundred musicians take to the stage to perform at "Orchestre Symphonique Kimanguiste" concerts. The orchestra intends to hold a grand open air concert commemorating the Democratic Republic of Congo’s Independence Day. An audience of several thousand is expected to attend. The programme includes Beethoven’s Ninth, 'Carmina Burana', as well as works by Dvoøák and Verdi. The rehearsals, their collective music-making and, finally the orchestra’s concert performance combine to convey the strength and determination with which Congolese civil society seeks to liberate itself from the vicious circle of colonial oppression, tyranny, poverty and war.