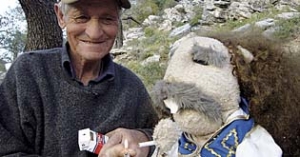 Kamakia – The Heroes Of The Island

A rather special documentarian named Kosta Rapadopoulos travels his
home land to ask older men about their amorous exploits with the female
tourists who came en masse to Greece in the 1970s. This film tells us about
the bicultural encounter between the impetuous "Greek stud" who allows
Mum to feed him until he gets married, and the emancipated woman who
is on the pill! The filmmaker’s investigations lead him to the legendary
"kamakia", or "heroes of the island", who devoted themselves to meeting the
carnal needs of these women. It is a search that almost brings Rapadopoulos to his wits’ end.