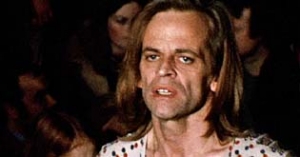 Jesus Christ Saviour
Berlin′s Deutschlandhalle on 20 November, 1971. The lonely figure of Kinski appears in the spotlight on an empty stage to recite his own text, "Jesus Christus Erlöser". The performance marks the realisation of a project which had preoccupied him for more than ten years. This is the age of the hippy movement; the musical "Jesus Christ Superstar" is a sensational success. But Kinski′s "Jesus Christus Erlöser" is no hippy happening. It is intended as an intensely emotional reading, concentrating purely on the actor′s voice. The content, according to Kinski, is the "most exciting story ever told: the life of Jesus Christ", as one of the "most fearless, most free, most modern of all people; a man would rather be massacred than to continue to live and fester."

Peter Geyer′s film portrays the actor′s attempt – that was to last an entire evening – to recite his text. The first performance ended in tumult. Kinski later wrote in his autobiography: "It’s just like two thousand years ago. This mob is as godawful as the Pharisees. And at least they allowed Jesus to finish speaking before they nailed him to the cross." But there is an epilogue. Once the crowds have all gone and there are only a few members of the audience left in the Deutschlandhalle, an exhausted Kinski appears in their midst and recites his text, from beginning to end, quietly and in a hoarse voice. "My exhaustion has disappeared", he was to write later. "I can’t feel my body any more. At two in the morning it′s all over." Peter Geyer′s film is a unique document, not just about a generation that was questioning authority, that had a difficult relationship to art, that no longer wanted to listen but wanted to discuss – but also about an artist at a particular point in his career.