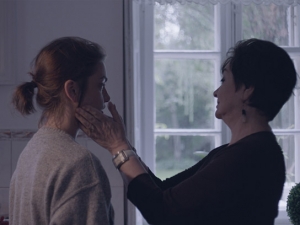 Summer, 2016. In Poland, the right-wing conservative party PIS has been in power for about a year. Matriarch Danuta is devising a programme for her golden wedding anniversary and has enlisted the aid of her entire family. Danuta’s grandchildren are used to going along with their grandmother’s caprices and have decided to accept their fate. This year, Danuta has a fashion show planned during which the girls are to model their grandmother’s favourite dresses down the decades. The grande dame plans to share personal stories and anecdotes about things she experienced whilst wearing each fashionable creation. A few days before the great event, her German niece Alexandra arrives in Warsaw to help with the preparations. But no sooner does Alexandra join them round the table than politics begin to dominate their every conversation – not just with Danuta but with all the other clan members, too. Alexandra soon realises that she is the only liberal in their midst and that the women in her family are not at all interested in such goals as emancipation, women’s rights or open borders. She makes it her quest to find out how the ideological rift between her and her family could have grown so wide.